And I thought TOM was sort of wacky

I saw a strange thing Saturday afternoon. I met a friend for drinks in midtown, and while we were sitting at the bar, this guy went into the corner and started playing guitar and singing. And I mean really loudly. He wasn't bad or anything, it was just pretty distracting.

There were some other people at the bar, and a few who had come in with him were applauding, shouting out requests, and one girl was even taking pictures of him.

I didn't think anything of it at first, but this was about 4 pm, which seemed pretty early to have live music going, so I asked the bartender why they had him there so early.

It turns out the guy wasn't hired by the bar. He had literally just walked in off the street and started playing his guitar and performing.

The bartender asked me, “Is that wrong?” suddenly realizing that this was an unusual occurrence. (That's a real quote there, by the way, folks. I don't make these things up).

Now, perhaps this is the time to mention that the bartender was the ever-innocent Littlest K, one of the infamous K Sisters. She had scored a bartending job at this

little pub, this was her third time behind the bar, and Middle K (Jan) had called me to meet her there so we could give her sister lots of tip money.

Anyway, the manager wasn't there, and Little K was in charge.

But this troubadour, whoever he was, had fun, I guess.

At another point, the Littlest K was talking to us, and a customer at the end of the bar caught her eye and signaled for a drink, and, I swear, she looked at him all puzzled, and then suddenly realized - oh yeah, she was actually there behind the bar, and was supposed to, you know, serve people drinks. 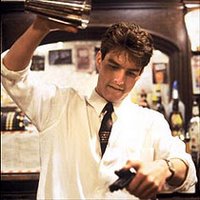 Let's just say, it might be a while before she is juggling liquor bottles around like Tom Cruise did in “Cocktail.”


(Although I wouldn't mind seeing her make out with someone who looked like Elizabeth Shue. But my luck is never that good.) 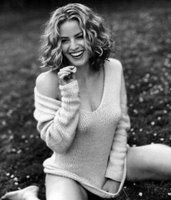 hahahah. i was waiting to see what you'd write! yes, it will be awhile til i am as skilled as tom, but in the meantime we had a fun day!

Maybe I should start going around to bars and performing my magic act now! :) Were customers giving this guy money?

You did a wonderful job bartending K, no worries!

Great piece of blogging. Glad I accidently found your blog. I would love you to visit this site kitchen stools and tell me what you think.