The sharks were better actors 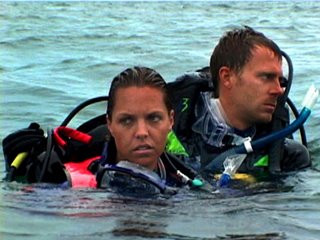 My friend Benedict Susan came over last night and we had a movie night. We watched three movies and got through two bottles of Shiraz. That's less than a bottle a movie, so we're not actually alkies, you see.

One of the films we watched was “Open Water.” It may just have been one of the dumbest movies I've ever seen. It's supposedly based on a true story, about an American couple left stranded in shark-infested waters after their tour boat returns to land while they are diving, the guide not noticing the couple is still underwater at the time.

They surface, the boat is gone, they're left in the middle of the ocean - and then (gasp) the sharks make their appearance.

It starred a couple of unknown actors, and, as far as I know, they are still unknown (although the girl did look amazingly like Charlize Theron, but it definitely wasn't her) playing the whining, bickering couple).

Let's just say by the end of the movie, I was rooting for the sharks.

And apparently this movie was a Sundance Festival hit in 2004. What happened to the idea that the festival was the place where daring, innovative, independent films that couldn't get made in the big Hollywood studio system get discovered?

This was more Lifetime Movie of the Week quality. If I had paid to see it in a theater I would have been royally pissed off.

Ok, that's today's movie review, sports and weather at the top of the hour.
Posted by J at 11:20 AM

Haha I saw that too. It was a good concept but it was just a bad movie.

I didn't think it was as horrible as you did, but it could have been done much better. That girl did look just like Charlize Theron though! I wonder if it was her sister?

I saw that last year. When the sharks were bumping up against them at the beginning that was pretty scary. But by the end I was like - ok we get it. Kill them already :)

Hey the girl's name is Blanchard Ryan, and she isn't related to Charlize at all.