I really want to be an astronaut! No, wait, a fireman.

I had drinks Thursday night with some former co-workers, one who is leaving to go live and study in Israel for a few months, and one who is having a birthday on Friday. Shalom and Hollaaa.

And, again, I realized: wow, I really do have some wacky friends.

The birthday girl casually confessed something that, let me now evilly admit, made me chuckle just a little.

She's one of the K Sisters, that ravenous clan I've written about on this blog before (they love their food, don't you know).

There is, to recap, the Littlest K, she's the tiny one I still haven't quite figured out yet. And there is Special K, the oldest, and sort of intriguing and semi-dangerous one - grrowwll. And then there is my bud, the sensible one in the middle.

So, just to be different, let's forget the K tags and call her “Jan.” As in Brady, of course, that most iconic of middle sisters. 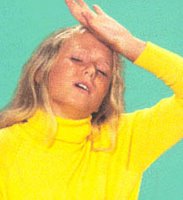 Now, you have to understand, I love her – she is cute, smart, funny, talkative, interesting, talkative – did I say that already? And, hell, once in a while, even a little bit of a diva.

But, boy, is she fucking wacky.

So, we're on the west side, leaving Thaila, walking across 50th Street and heading to Bar Nine, and Jan proceeds to tell me her girlhood dream.

Apparently, she always wanted to be a private investigator!

And she literally used that phrase.

“I always wanted to be a P.I” were her exact words, in fact. Which, I think, is when I unfortunately laughed.

You have to understand - Jan giggles when she sees dog poop on the sidewalk.

Let's just say, the thought of her interrogating a suspect, or trailing a cheating spouse, or whatever the hell hardboiled “P.I's” actually do, does not exactly spring easily to mind. 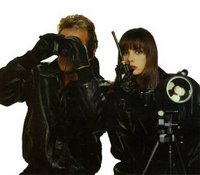 But, happy birthday, Jan. And maybe one of your gifts will be a cool camera with a night vision telephoto lens, or a .45 magnum for those tight scrapes you gritty P.I.s get in.
Posted by J at 12:21 AM

Thats pretty funny. Does your friend actually look like Jan?

I had a crush on Peter and he still looks good on that MTV show even though he's with that 20 year old slut model. :)

megster, she only looks like Jan during that season she wore the braces. But you know this isn't really supposed to be a Brady Bunch post you nerds.

Come on jbk you should know if you even just reference the Brady Bunch you're going to get a bunch of emails on it:)