His name will suddenly be very appropriate 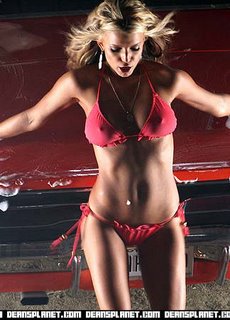 What a bunch of hypocrites. These right wingers claim to see sex in any context other than straight, vanilla, procreation among a married couple as somehow dirty. Hell, they impeached Clinton for a getting a hummer, but they want to eat with and ogle a couple of bimbos at their fund raiser.

And, of course, House Majority Leader John Boehner (R-Ohio), who will be sitting next to the “Dukes of Hazzard” star, is already putting out the word he doesn't really know who Jessica is.

“I’m not even sure if he knows who Jessica Simpson is,” the Majority Leader’s spokesman, Kevin Madden, told Roll Call, on cue.

Guarantee, that guy has wacked off to her Boots are Made For Walkin' video.
Posted by J at 11:03 AM