He's probably going to be the next Secretary of Labor 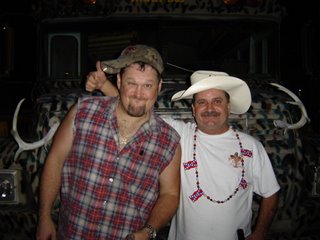 Forget abortion rights. I think the real red-blue divide in this country might be in our entertainment.

Now, I like to think I'm up on my pop culture knowledge, partly for my job, partly because I read a lot, and see a decent amount of TV.

But I saw a commercial this morning for a movie called “Larry the Cable Guy: Health Inspector” that made me say – What the fuck?

From what I could tell in the 30 second ad, it's about a dimwitted country bumpkin getting into all sorts of crazy misadventures (hmm - come to think of it, that describes the George W. Bush administration! Hey you've been a great audience. I'm here all week, don't forget to tip your waitresses).

But, seriously, how this movie seemed to spring out of nowhere and be starring this fellow got me curious, so a little googling, and it turns out “Larry” is a “comedian” who is hugely popular out there. Somewhere. God only knows where, although I can guess.

It is widely known, I suppose, that some TV shows appeal mostly to certain areas of the country, or at least to certain sensibilities (Seinfeld, Friends, Will & Grace, Sex and the City, The Sopranos, Larry David were and are very popular in the bigger cities, the blue area of the country, if you will). Other shows or personalities, like, apparently, Larry the Cable Guy, are incredibly popular in red state America.

Part of it is the proliferation of media choices. At one point, there were only three big networks, and everyone in the country watched Lucy or Jackie Gleason or Ed Sullivan at the same time, whether you were on the East Side of Manhattan or East Texas. Now, of course, there's 500 channels, and everyone can find a niche station that caters to their interests.

There are pockets of entertainment out there that are absolutely huge in big swatches of America, but are under the radar of many of us here in NYC. And, frankly, incomprehensible to many of us.

Or how about NASCAR, which is now the most popular spectator sport in America. Think about that. Millions of Americans love to see cars race around a track for hours at a time. And I'm not talking about the big races that come along once a year, like the Indy 500. NASCAR is every day of the week. And it's HUGE. But, if you asked the average New Yorker some questions about it, who the big stars are, what cars are used, he would be absolutely stumped.

And by the way, there's no right or wrong in this. People enjoy what they enjoy, and who the hell am I to say, well, Larry David is funny, but Larry the Cable Guy isn't. (I do think that, but that's my personal taste.). I just find it interesting that there is such a cultural divide in the country these days, not just in our politics, but in our entertainment too.
Posted by J at 10:39 AM

haha I saw this guy on Comedy Central once. Not funny but the audience was screaming with laughter so who knows.

Hey JBK he perfoms with Jeff Foxworthy a lot. They had a TV show every week I think.

Maybe it stems from all the right wingers "boycotting" Hollywood. Go look at any republican blog and you'll see plays on every actor's name: George Clooless, Ed Asinine, Harry Belabuffoonte, etc. Because, you know, they have nothing better to do with their time than think of Limbaugh-like play on names. If they're busy boycotting all those damn libs in "Follywood," that only leaves them things like Larry the Cable Guy and Nascar! :)

I watched aboput 3 minutes of NASCAR once and couldnt take it any more. Boring stuff. Its people waiting for a crash basically.

Larry David is much funnier than this guy. He was on a roast of somebody on the Comedy Channel and it was just stupid.