Corky or Lucy? You make the call

Thursday night and birthday margs at El Rio Grande with my bud, “Corky.” She was actually very tame, considering multiple $10 margaritas were involved. Boringly tame, to my chagrin. Well, except she had her shirt on backwards. But, apparently, that was on purpose. Hey, it's a look, I guess?

And she also was quite proud of her new haircut, which she claimed cost $700 (!) It was done for a TV show, so she didn't have to pay for it, but, if you ever wonder why people in Iowa hate New Yorkers, this just might be one of the reasons – they get $700 haircuts.

Anyway, regular readers of this blog may recall, I've mentioned Corky here before. But, I'm thinking, Corky may be the wrong name for her. Perhaps Lucy would be more appropriate.

She doesn't have red hair (she has that $700 blondish hair now), but she reminds me a little of Lucille Ball. You know, the old black & white Lucy, when she was married to Ricky Ricardo and always coming up with all sorts of wacky schemes and getting into crazy situations. That's Corky.

She once started a business a few years ago, a special events company. (I don't know how prevalent such things are outside NYC, but, since there are so many bars and clubs in the city vying for attention, they often hire events planners and promoters to try to get people to come to their places).

So, Corky and a friend, one of the K Sisters, in fact, (the middle K, Jan, also mentioned here previously), decide to establish a fabulous special events operation.

Well, let me just tell you, Corky and Jan start off like gangbusters. And it's very exciting. They have business cards printed up. They incorporate at a cost of a few hundred dollars. They become an LLC no less! They are going to take over the nightlife of the city. They are monitoring the ads in the back of New York magazine to see where they can swoop in and start planning parties. Then, the moment finally arrives, and they are ready to debut. They throw an opening bash to celebrate the launch of the new business. They invite their family and friends to a lounge on the East Side for the big premiere night. Free drinks. Tasty hors doeuvres. Got quite a good turnout, too. Not bad.

And...er, that was basically the last fucking party they ever organized. 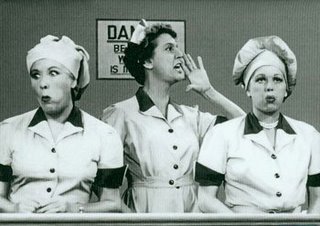 They lost interest in it all, and also lost several hundred bucks after expenses.

You know those two guys who invented Google? Built that company from scratch, faced the odds to go up against the established powerhouses, and are now powerful and influential gazillionaires?

This is "Corky" speaking. I like the name "Lucy" better, lets use that from here on out. Thanks.

corky is my work bud...i feel u on the name lucy...and i too was wondering about her backwards shirt yesterday...how much you wanna bet people start busting out w/ shirts like that all over town now? kind of like kriss kross...

ps - love your blog - will add it to my 'to read and waste time at work list' immediately!

I vote for Lucy, but I have always thought of Jan and Corky as Lucy and Ethel even when they were in high school.
Lucy's Dad,
(Mr. McGillicuddy?)

hehe I know her and both names work, but I like Corky best since it reminds me of that kid on that TV show. You know, the "slow" one:)