This administration is masterly at twisting criticism of the Iraq war and portraying it as somehow an "attack on the troops."

It was blatant during the 2004 campaign against decorated veteran John Kerry. It is especially strident when anti-war activists like Cindy Sheehan dare to protest. It happened recently when Pennsylvania congressman John Murtha, another decorated vet, and historically seen as one of the most pro-military people in Washington, called for a troop withdrawl after being convinced the Iraq War was turning into a quagmire. He was immediately slimed by an offshoot of the "Swift Boat Veterans" group that had went after Kerry during the campaign. They charged Murtha with somehow wanting to "abandon" the troops and harm their morale.

Now, the Joint Chiefs themselves have protested a recent editorial cartoon in The Washington Post. In it, a soldier is seen lying in a hospital bed, his arms and legs amputed from injuries suffered in Iraq. Donald Rumsfeld, as a doctor, is saying to him: "I'm listing your condition as battle hardened." 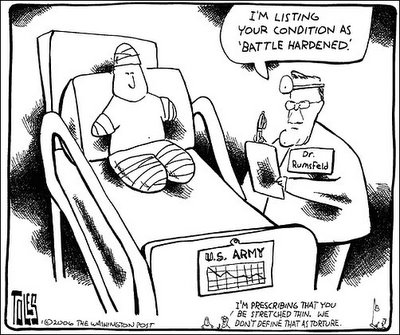 As the Post reported today in an article about the brouhaha, the line is based on actual comments Rumsfeld made last week, as he rejected warnings that the Iraq war risks "breaking" the Army, by saying the U.S. military is now "battle hardened."

A letter to the editor in the Post today, signed by Gen. Peter Pace, chairman of the Joint Chiefs, says: "While you or some of your readers may not agree with the war or its conduct, we believe you owe the men and women and their families who so selflessly serve our country the decency to not make light of their tremendous physical sacrifices."

How the hell can this cartoon be seen as making light of injured soliders? It certainly portrays Rumsfeld an as unfeeling, incompetent bastard, a portrait many agree with. But making fun of the troops?

Fortunately, veteran's groups aren't so easily fooled. The Post quotes Dave Autry, of Disabled American Veterans, who said he was "certainly not" offended by the cartoon.

"It was graphic, no doubt about it," he said. "But it drove home a point, that there are critically ill patients that certainly need to be attended to."

But just wait till Rush Limbaugh and the rest of the rightwing hate mongers of talk radio get a hold of the issue, and it will be twisted into the "liberal media" once again "bashing" the troops. Not that Limbaugh and his ilk ever served a day in uniform of course.

Limbaugh, O'Reilly and Bush and his people, Cheney etc. never served a day either - but they always claim to love the military so much. Why didnt they want to serve in Vietnam when they had a chance?

There's no way you can think that cartoon is poking fun at amputated soliders. That's a smoke screen being sent by the general to lash back at criticism of Donald Rumsfield.

Thats typical of the anti-military mindset of Democrats. I'm not surprised you like it. And you wonder why you keep loosing elections?

the right wing have already started trying to paint the cartoon and make it anti-troop. They really are freaks.

i think the right are such big mouthed supporters of the military since they feel such guilt over the fact they they invariably never served in the military themselves. Take a look at all the loudmouths who are so rah rah we love the troops - I bet you can find hardly any who actually were in the army themselves. The ones who were, like McCain, are not like Limbaugh and the other chickenhawks.

We're going to do to that guy what we did to Dan Rather. You people on the left have to understand, the days when you can get away with this shit are over.