Too much? Even for loyal fans of “Dear Leader?” 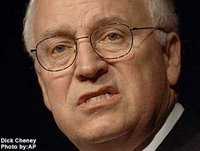 It's hard to picture the loyal Kool-aid drinkers actually turning on the Bush crew, at least not in any serious or permanent way, but could the sheer depravity of the behavior shown by Dick Cheney's team in the aftermath of his shooting a fellow hunter, the snide comments by the unofficial spokespeople about whose fault it “really” was, the double standard and favoritism shown by local law enforcement, and the willful obfuscation by the whole lot of them -- be enough to make even the most loyal fans of “Dear Leader” finally say: “Wait a minute.”

The disastrous way Cheney and his people, as well as White House Press Secretary Scott McClellan, have handled the news of the shooting of 78-year-old Harry M. Whittington certainly seems to have given some usually loyal Republicans pause.

Maybe it began with the disclosure of the shooting, when Mary Matalin, the whiny, nasal-voiced GOP operative, who was among those advising Cheney on how to handle the aftermath (and, boy, that has sure turned out to be some great advice, huh? Hope she got top dollar for it) made a point of blaming the victim. You know, the 78-year-old man who was shot in the face by the veep.

"(Cheney) felt badly, obviously," Matalin was quoted as nasally whining. "On the other hand, he was not careless or incautious or violate any of the [rules]. He didn't do anything he wasn't supposed to do."

Er, well, yes, except for that whole shooting a 78-year-old man in the face thing, if you want to be picayune.

I'm not a hunter, but I'm pretty sure he's not supposed to do that.

Or maybe it was the comments from Katharine Armstrong, the millionaire lobbyist, whose well-connected Texas family owns the ranch that was the scene of the...crime? Incident? Accident? Oh, let's just call it the scene of the Vice President shooting a 78-year-old-man in the face.

This lovely belle of the Lone Star State at first downplayed the seriousness of the actual shooting. It was just a “peppering.” Hell, you're not a real Texan if you haven't been peppered with buckshot, she seemed to imply. And then, like the Dick, she also took a shot at her good friend, Harry M. Whittington, who, she said, "came up from behind the vice president and the other hunter and didn't signal them or indicate to them or announce himself. The vice president didn't see him. The covey flushed and the vice president picked out a bird and was following it and shot. And by god, Harry was in the line of fire and got peppered pretty good."

See, it was all the old coot's fault anyway.

Except, apparently some good old boys in Texas, ground zero of the Bush cult, aren't too pleased with the Blame Harry game.

Paul Burka, Executive Editor of Texas Monthly, writing in Slate, says this isn't going over too well: “If there is anything that Harry's friends...are angry about, it is not the shooting itself but the attempt by White House Press Secretary Scott McClellan to place the blame on the victim. It's the shooter's duty to know what he is shooting at and where his companions are. A shooting accident is always the fault of the shooter. Always.”

On top of the callowness, the delay of a day to tell the public that the Vice President of the United States had shot a 78-year-old man in the face has also garnered quite a bit of criticism, some of it coming from the former press secretary to Bush Sr., no less. Putting the blame squarely on the Dick, Marlin Fitzwater told E&P: “It is all Cheney, he is the key that has to start all this. I am appalled by the whole handling of this."

And some are also wondering about the degree of deference shown to Cheney by the local cops, who waited some 12 hours to interview him. The county sheriff was quick to say in his official report that there was no sign of alcohol involved in the shooting. Well, I imagine if you wait approximately 12 hours before making visual contact with a man who shot a gun into the face of another man, any sign of alcohol - slurred speech, odor, unsteadiness - tends to be quite dissipated, especially if no blood or breathalyzer tests are administered.

But, hey, I'm sure those Texas cops would have done the same thing if Dick Cheney's name was Hector Gonzalez, and instead of being VP of the US, he was a ranch hand on the mighty Armstrong Ranch. They would surely have waited till the next day to politely talk to him too. Yeehaw.
Posted by J at 12:57 AM

lol I hate Mary Matalin too. Her voice is like fingernails on a chalkboard - its so annoying! I can't believe James Carvile married her?