Swanee, how I love ya

I had lunch today with a friend I haven't seen in a few years. I used to work with her in the music business, and those were some fun times. We were at one of the (then) Big 6. Now, there's only 5 with the Sony and BMG merger of a few years ago.

This was about six years ago, and the industry was flush with cash then, it was before Napster and CD burning and Internet downloading had really all come together to pummel the labels. Great parties, great conventions, great perks. You could submit an $800 expense account bill and no one would even blink. Sweet.

There were some characters too. I really do have wacky friends. She reminded me of a great story I told that I had almost forgotten. I had just started working there, and my then boss and I had set up a lunch with the guy who covered the music industry for the Hollywood Reporter, so I could meet him. His name was Jeffrey Jolson Coburn (he may still be at the Reporter, for all I know). Anyway, he was based in L.A., but was coming to New York for a convention, and, because of the timing of his flight, was going to land, take a car to meet us at the restaurant, and then go on to his hotel.

So my boss and I go to this great Italian place to wait for him at the designated time, having allowed for landing, luggage, the trip into midtown from LaGuardia. And we start sipping on the vino. The music biz, of course, is as alcohol fueled as the TV business. (This is why I could never work in accounting.)

But now he's 45 minutes late, an hour. With no explanatory call. And my boss starts getting angry. She calls back to our office to have her assistant check to make sure the plane had landed when it was supposed to, which, at this point, was about two hours earlier. It had landed right on time, and so now she's fuming. 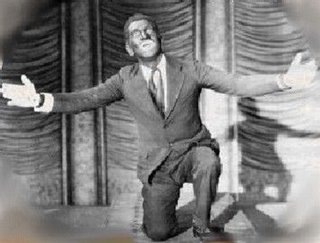 She: "Yes, he's terrible. Can you believe, he goes around telling people he's the great grandson of Al Jolson!"


After I gently pointed out the whole concept of Al Jolson and minstrels, I don't think we were able to stop laughing for an hour. Anyway, he never showed up, and I believe the lunch bill that day was about 250 bucks. My boss and I became buds, and every time she did something goofy, I would just say – ahem, Al Jolson. Good times.
Posted by J at 3:06 PM