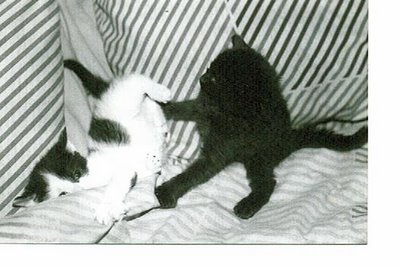 “I love cats because I enjoy my home; and little by little, they become its visible soul.”
- Jean Cocteau


I opened a box and found this old picture of my cats when they were kitties.

They were brother and sister, and both are gone now. Each had a kidney disease and died a few years apart (the boy at 9, the girl just last year at 12). It must have been some sort of genetic thing in their family, although I guess kidney problems are fairly common in felines.

Cats can have a reputation of being aloof, but these two had the sweetest personalities imaginable (notwithstanding Othello attacking Nel among the pillows there). They constantly wanted to be with me, and to be petted, and to snuggle up if I was on the couch.

And if one saw the other laying with me, he or she had to then immediately jump up to make sure they were getting equal attention too.

anonymous that sounded dirty the way you said it lol

J, I'm sorry about the loss of your cats. I found mine in my yard when he was only 4 weeks old, and in very bad condition. He'll be 7 this year, and I tear up if I even think about losing him. Your cats were both adorable!

Thanks not. I had forgotten I had all these pictures until I stumbled on a box that has been sitting on the foor of my closet for years. It was filled with a lot of shots of them when they were young, you know when you take a million pix of them. I was smiliing and feeling sad at the same time when I was looking at them. And, of course, after feeling that way I had to immediately go down to Blondie's and drink beer and curse and spit and scratch myself to turn somewhat into a guy again:)

Cute cats, I'm sure they had happy lifes!!!