Random thoughts on Smirky McChimp and his speechifying

Okay, after a post-Blondie's ginger ale, some thoughts on the State of the Union speech:

I hate how this empty suit hides behind those in uniform when he throws out the guaranteed applause lines about how we must support those brave men and women in the military. Well, of course every one supports them. The draft-dodging little bastard neglects to mention they wouldn't be in harm's way in Iraq if he hadn't invaded that fucking country in the first place.

Can someone teach this dipshit how to actually pronounce the words “terror” and “nuclear.” They come slurring out of his mush mouth as terrah and new-q-lur.

Can Bush look any more arrogant when he does that little wink? Cocksucker!

Sam Alito is no Sandra Day O'Connor. Just seeing the cutaway camera shots to him, I already hate this little prick.

However, Laura Bush IS Jack Nicholson...as the Joker, of course. 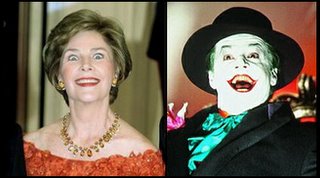 Where was Tom Delay? I didn't see that greasy haired little fuck, at least in the CNN clips. I wonder if he was visible during the live broadcast?

I loved Hillary's dismissive little smile when W made a lame joke about his father and Bill being buddies.

The nerve of this putz, talking about the need for more civility in Washington. This man and his party have labeled political opponents as “weak on terror,” or even traitorous, because they happened to disagree on the best ways to fight terror and preserve civil liberties at the same time. Now he wants civility and bipartisanship? Giant cocksucker!

The nerve again when he brags about the economy. We went from a huge surplus under Clinton to a huge debt under Boy George. Huge cocksucker!

CNN had the nation's self-appointed morality czar and secret gambling addict Bill Bennett commenting on the speech. Shouldn't this fat fuck really just be giving opinions on the best buffets in Vegas?

The mans a Monkey faced shit talker and thats the tooth.

Bush is bad but I don't think Hillary is any better.