I hope the people in 23-L don't resort to cannibalism 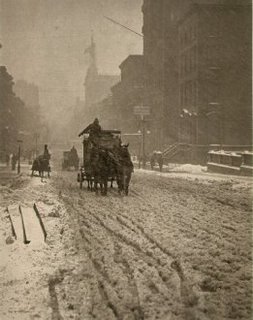 Big blizzard in New York last night. Big! Huge! It's like the big one of 1823 or something.

But people sure do love to panic, though. I went out to get the paper today, and swung by the Key Food to get some orange juice, and you would have thought Manhattan island was going to be cut off from the mainland for a year. The place was jammed, and people were frantically scooping up milk and canned soup. It's amazing the way folks rush out to get supplies when there's a bit of snow.

I always wonder what they think is going to happen? That the food supply chain is going to be severed for a week? That they'll be trapped and starve in their apartments, only to be found by Con Ed workers in a month. Have they ever run out of food anywhere near 2nd Avenue in the past because of snow? What brings this hysteria on?

Oh well, I've got a case of wine (Big River Shiraz – ahh, good stuff, and a very reasonable price, may I say), and my freezer, as always, is jammed with more Omaha Steak packages than your average Nebraska restaurant, so I don't really worry.

I love the snow! At least when its coming down at first. It gets tiring fast though after a few days of it.

I've always wanted to ski through Central Park when it gets like this.

I would love some filet mignon right now. Snowy weather always make me hungry as hell.

It's just cold where I am but I think I would like snow once in a while.

Ok, it's miserable out there. I just got home and had to walk 12 blocks, there were no cabs. I HATE THIS!!!