Gratuitous picture of the week 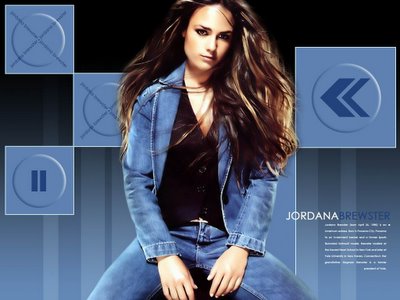 Has it ever happened that you've never really been aware of a particular actor or actress, but then, all of a sudden, you'll notice them in two semi-obscure movies within the span of a few days. And not in recent films either, but older ones, which both just happen to be playing on TV in the same week.

That just happened to me with Jordana Brewster. I was not familiar with her before, but a few nights ago I was flipping through the dial, enjoying my beautiful LCD HDTV (cough), and the movie The Faculty was airing. I had never seen it, and just as I stumbled upon it, a scene with Jon Stewart was on. He played a teacher in it, sporting a strange goatee no less. This was before he really hit it big on The Daily Show, so it caught my attention, and I started to watch the movie. If you've never seen it, it's a tongue in cheek horror flick, where aliens take over teachers' bodies at a high school. Sort of goofy, but interesting, in its way.

Anyway, one of the students is played by the aforementioned Jordana Brewster. And I have to tell you, she looks amazing in this movie. She also has perhaps the shiniest, most luxurious hair I have ever seen. Among other commendable attributes.

Anyway, skip ahead to Thursday night. I was at a work event, and, after it, some of us went to Rosa Mexicana, by Lincoln Center. (Just as an aside, those pomagrante margs should really be illegal. Oh my.)

When I got home and started flipping through the channels, who pops up in a movie yet again? Jordana Brewster, of course. This time in D.E.B.S., another film I had no interest in seeing when it was originally released, and this plot, trust me, I have not the energy to describe. 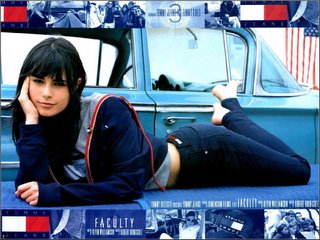 So, from never really being aware of Jordana, as I like to call her now, to seeing her twice in a span of 3 days. And if the movies hadn't aired so close to each other, I might never have even paid that much attention to her if I had just seen one. Weird. And I wish it actually meant something, but it doesn't. I just find it interesting when stuff like this happens.
Posted by J at 1:57 AM

She's smokin. Did you know she used to date Derek Jeter?

Hey jbk I googled her. She's 26, and is not only hot but she's smart. She was accepted to Yale. She was born in Panama to an investment banker and a former Sports Illustrated swimsuit model. She grep up in Brazil, London and NY. And is fluent in English and Portugese. Her grandfather is Kingman Brewster, the former president of Yale University. She got her big break in All My Children, and was in The Fast and the Furious as well as Faculty and DEBS.

Do you think the fact that her grandfather was president of Yale might have had something to do with her being accepted there?

I gotta go with pink sidekick on this one. I was pretty impressed until I got to the part about gramps.

Must be a chick thing then. I dont care who her granpa is...she's hot and smart. Perfect.

Nah. I would have said that about a guy, too. I do admit though, she is hot.

The Faculty is on again on The Movie Channel at 8 pm Friday night so you can see your girlfriend again if you want!