Can you hear me now?

You know, in the good old days, like, oh, two years ago, you could usually tell who the crazies were on the streets of New York.

They were the ones strolling down 7th Avenue holding an intense conversation with an invisible friend, sometimes even delivering both sides of a “dialogue,” arguing and rambling about any and all subjects. Often loudly.

But with those Bluetooth wireless headsets for cell phones, it's not so easy to tell anymore.

I've been startled a few times by some joker standing next to me at a crosswalk who suddenly starts chattering away, seemingly to himself, until I realize he's on his cell.

You just can't figure out right away now if the guy next to you is simply having an argument with his girlfriend in Brooklyn or is about to pee on you. 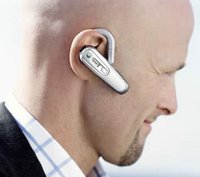 Of course, the guy in that picture looks like he would pee on you anway, even if he was talking on his cellphone.
Posted by J at 9:45 PM

i saw someone talking in their car once and at first thought they were singing to music but their hands were gesturing all over and their eyes were bulging and I finally realized it was a cell phone call. There's a lot of crazy looking people out there now.