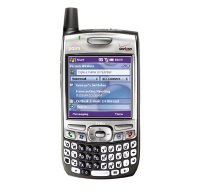 Just wanted to thank the folks who emailed me with a LOT of comments, anecdotes and links about the Treo. (Who knew there were so many web sites analyzing cell phones or even devoted to particular brands!) Truly there are a lot of phone geeks out there - and I say that with gratitude. From what I read, I think I'm going to give the 700 a shot, but my contract with Verizon Wireless doesn't end until July, so I won't be making a final decision until then (damned if I'm going to pay them an early cancellation fee, or give up the $100 rebate they give to keep you at the end of your contract) so who knows, the 700 will probably be obsolete by then.

Update: Ok, now I'm not sure anymore. Since I said I was probably going with the 700, I've gotten emails that I'm making a huge mistake. One post in the comment section simply said "Have a good time," and, in my paranoid mind, I don't know if he was being sarcastic or genuine :sigh: Fortunately I do have a few months before I make the switch, and until then my little LG6000 will suffice.
Posted by J at 10:09 PM

Have a good time

You still have time so you may also want to consider the xv6700 which is getting some good buzz. Look into it before you make your decision.