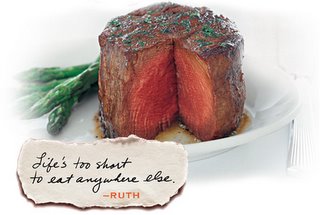 It's a rainy damp Sunday in New York, but I actually enjoy it. It's a good time to put on a pot of coffee, and curl up and catch up on reading in a cozy apartment.

I had a great steak dinner Saturday night at Ruth's Chris Steak House on the west side. And it came about in an unusual way, but before I tell you about that, and not to get too sidetracked on a rant -- what the hell is this anti-steak bigotry among so many of the female persuasion?

Earlier in the week, I invited a girl to accompany me to this dinner. The reply: “Ohh, I don't eat steak, can I get fish or something else?” Well, sorry, Mother Theresa, but these places are expensive as hell, and I'm not wasting one of the great steak houses on someone who is not going to order meat, so, no, you can't.

Fortunately, the next invitee was as big a carnivore as me – and she knows I say that with affection.

Now, I'm normally a Ben Benson's man for my NYC steak house visits, but I received a $100 certificate for Ruth's by answering one of those silly on line offers that popped up on a Web site I was visiting.

You know the ones I'm talking about, they show up all the time, offering free iPods or the like if you play along, and, like most sensible people, I normally just click them off. But I decided to try this one.

Now, let me caution you, I still think most are probably shady. But I trusted the site I was on, and the survey company seemed to be a legitimate advertiser on it, so I figured, what the hell. I would advise creating an email account solely for one of these surveys, as I'm sure they sell the address to every damn company on the face of the earth. I made up a new Yahoo name that I have, of course, not returned to since, and it's probably got about 7 bazillion spam emails on it by now.

To get the prize, you had to sign up for three things on a list, but if you chose correctly among the multiple offers available, you could work it so it cost you basically nothing, other than a minimal charge for something you might want anyway. One was for a no-fee MNBA credit card. Ka-ching, done. Another was for a 30-day free AOL trial. Okie dokey, signed up and already cancelled on the 29th day, no charge incurred. Suckers. The third offer, and the only one that will actually cost me anything, was for the Columbia House DVD club, which I had been eyeing anyway. It was one of their usual plans, join, get 10 free DVDs immediately, and then agree to buy 4 more over the next year at regular price. Fourteen DVDs for about $75 spread over a year? Not a problem.

So I went through the survey wamma jamma, and, within 3 weeks, got my Ruth's Chris certificate in the mail. Sweet.

We split some mushrooms stuffed with crabmeat. I had the New York strip, she had a filet mignon. A plate of mashed potatoes with a hint of garlic and a plate of spinach au gratin for the table. A bottle of an amusing little cabernet sauvignon accompanying the meal. I got an after dinner single malt Scotch, she went with a Bailey's.

After dinner frolics: priceless.
Posted by J at 3:24 PM

Don't be jealous, it's not becoming.

You're a bastard. That steak is making me salivate. I need some of that...and some after dinner frolics...