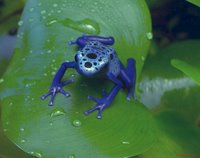 I remember reading a few years ago that the world's frog population is dwindling, and no one really knew why. Now they do. Scientists are reporting in the journal Nature that global warming is causing climate changes leading to fungus outbreaks lethal to frogs, salamanders and their kin.

"The frogs are sending an alarm call to all concerned about the future of biodiversity and the need to protect the greatest of all open-access resources - the atmosphere," write the scientists, Andy Dobson, a Princeton University ecologist, and Andrew R. Blaustein, a zoologist at Oregon State University, according to The Times.

For years the GOP and their business allies have been poo-pooing global warming, calling it an unproven theory. No matter what studies are done, it goes into the trash pile. (But Intelligent Design, that they have no problem with, of course.) They really are the live-for-the-moment party. Huge national debt? Ehh, forget about it, we'll let the next generation or two pay for it. Global warming? Don't worry, we'll be dead by the time New York is under 20 feet of melted polar ice cap. Whatever happened to the conservative party actually being concerned about conserving?

The pigeon reference in the headline, by the way, is one of those New York mysteries. You never see baby pigeons. Come to think of it, you rarely see dead ones either. What's up with that?
Posted by J at 3:59 PM

The rats eat the dead ones. Probably some of the baby ones too.

Well isn't that just a lovely image. Thanks mobiusrules.

I think I speak for everyone when I say eww.

Info on why you 'never see' baby pigeons: