It's not the movies that have gotten smaller, it's the celebrities

One of the fun things about living in NYC is that there are a lot of celebrities here, and they walk around the streets and pop charmingly into delis and wait in bathroom lines, unlike L.A., which has more celebrities, but they don't actually walk around or wait for anything. I have friends who can spot a star a mile away, and constantly amaze me with their sightings. But, as I was reading Gawker Stalker tonight, I realized that I rarely spot any of the multitude of celebs my fellow New Yorkers apparently ogle every day, and it's maybe not so much because I'm oblivious (although I'm sure that plays a part) but it's because I have no freakin' clue what some of these folks look like (or even WHO some of them are).

And the few leftovers fall into the "maybe I would, maybe I wouldn't" category: Kate Moss, Victor Garber, and "Wayne," the brother from "The Wonder Years." (Even the Gawker Stalker didn't know his name).

Is it just me, but why does anyone know what Ben Gibbard looks like?

And ok, maybe Kate would ring a bell if she was doing this at the time: 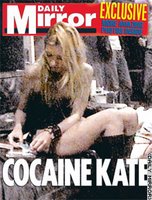 ok, I give. Who is Ben Gibbard?

I saw Diane Sawyer by Lincoln Center yesterday. She looks like shes had work done.