Is the entire family retarded? 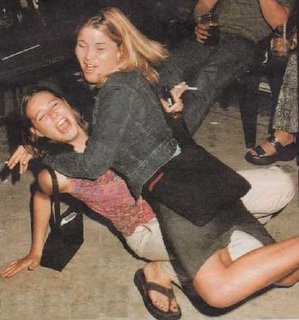 The following asinine statment from Laura Bush, made during her current travels in Africa, was noted approvingly today by Kathryn Jean Lopez, the rightwing dimbulb who edits National Review's Corner:

"In a country or a part of the world where one in three people have a sexually transmitted deadly disease, you have to talk about abstinence, you really have to," Mrs. Bush said. "In many countries where girls feel obligated to comply with the wishes of men, girls need to know that abstinence is a choice."

Jeezus. Is every member of the Bush family simply a freakin' idiot? Let's look at that sentence again: "In many countries where girls feel obligated to comply with the wishes of men" (pause for gasp of disbelief) "girls need to know that abstinence is a choice."

What part of obligated to follow the wishes of the men doesn't she understand? How does a scared, powerless 14-year-old girl in a Muslim patriarchal society have a choice about anything? These are countries where rape victims are put to death for "dishonoring " their families. But according to the dutiful wife, nah, they actually have a choice. Yeah, they have about as much choice as Jenna and Barbara do in avoiding alcoholism, giving the pickled gene pool from where they were spawned. Pathetic.
Posted by J at 4:34 PM

why do you have to put a picture of Bush daughter falling down. What does that have to do with Laura Bush's comment? Unfair.

anoymous - the alcholic proclivites of the Bush twins was actually referenced in that post. But even if it wasn't - come on, how can you not love that picture?