In this episode, the K's converge in midtown and New Jersey is just a little bit quieter

I ended up hanging out in midtown for a couple of hours Friday night with the K sisters again. Readers of this space may remember my encounter with them last week – they're cute, funny, a little spacey, and ahhh, what's that other descriptive phrase I'm looking for? Oh yeah, wacked out of their feverish minds.

An enterprising producer could definitely get a reality show from these girls. (It would have to go the pay cable route, of course. It would not survive on basic, with the new censorious climate we are enduring).

And I even met the elusive third sister, Special K. She may just reside in Pine Valley next door to Erica Kane, not to imply soap opera or anything. I'm just saying.

Although, actually the real wackadoo moment was when we were talking about Oprah's recent confrontation with author James Frey, and the Littliest K mentioned she had read somewhere that Oprah would probably do a better job questioning the President than the White House press corps. As I gently reminded her, that did sound somewhat familiar – maybe because I had written it on this freakin' blog just a few hours earlier!!!

It's interesting observing the dynamic between them. Even though all three have graduated from college, are working in the real world, have moved out of the family home, etc., and obviously love each other, you just know they will revert to childhood rivalries at the drop of a scrunchy.

Let's say I sense there were a lot of chick fights going on in the K household as they grew up. Not to mention some flashy verbal pyrotechnics, with each trying to get a word in edgewise at family gatherings. Never have you heard human beings talk so fast, without drugs actually being involved.

Nor, by the way, have you ever seen individuals so thin eat so fast. Actually, there was no food last night, but last week appetizers were involved, and let me tell you, I was afraid to reach to sample any. My hand would have been gnawed off like one of those poor downed zebras you see surrounded by a pack of lions on the National Geographic Channel. 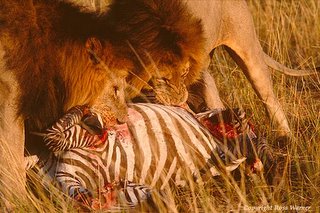 Anyway, I'll take it upon myself to option the rights to the K Sisterhood, and sell to any reputable production company. I envision The Osbournes meet the Hiltons, with a dash of the family from the Chucky movies thrown in. Move over Gastineau Girls, and let the bidding begin.
Posted by J at 12:35 PM

i was wondering how you would recap the evening - and might i say, you did a fine job.

I'll take any and all compliments, Littlest K, they're better then the jealous comments from a certain anonymous individual! :)

yeah i saw that. what the fck?

Some people, right! And watch your language on my blog, missy - I saw where you were going with that last comment.

haha. sorry. some people just bring out the worst. will watch for next time.

That's better. And thanks again for not gnawing my hand off.