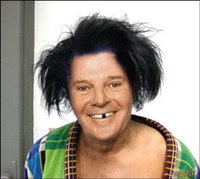 Aww, seems like things are not looking too good for House GOP leader Tom "Paulie Walnuts" DeLay in his district, these days.

According to the Houston Chronicle: "Only half of those who cast ballots for DeLay in 2004 said they will do so again. And while a fourth of the 2004 DeLay voters still aren't sure whom they will vote for this year, almost 20 percent have defected to other candidates."

Shame. He seems like such a nice fellow, too.

(DeLay's mug shot morphed with that of the hardest working man in show biz, James Brown, as envisioned by Gilliam).
Posted by J at 11:03 PM

you should have used the Nick Nolte mugshot!

anoymous - that's from jimgilliam.com. I know less about Photoshop than W. knows about running a war. Besides, I like the missing tooth.