Ann Coulter's dick gets a shout out 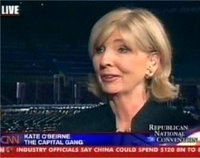 Kate O'Beirne, right-wing commentator and former regular on CNN's Capital Gang, has a new book out that is causing much amusement. This latest screed from the poison pens of the right is charmingly titled, "Women Who Make the World Worse: and How Their Radical Feminist Assault Is Ruining Our Schools, Families, Military, and Sports" and, as usual, is filled with attacks on Hillary Clinton and the rest of the right's bogeymen(women).

One of O'Beirne's more amusing statements -- and I kid you not -- is this gem: "I have long thought that if high-school boys had invited homely girls to the prom we might have been spared the feminist movement."

That's Kate up on the right there. Commenting on homely girls. Let's just say I wouldn't fuck her with Ann Coulter's dick.
Posted by J at 8:31 PM

Ann Coulter has an adam's apple! You can look it up.

Kate-o might have been a kutie in 1960something, but that was about 300,000 cigarettes ago. Ever see her teeth? Iich.