And now the CBS Babealicious News 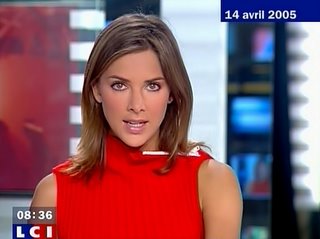 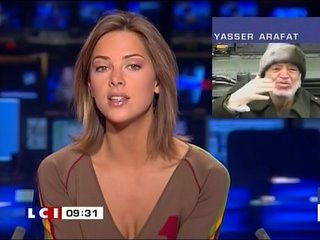 Say what you will about the French, but their newscasters - at least this one - blow ours away. If CBS is still not sure what to do about replacing Rather, I say they put Melissa Theuriau behind the desk and watch the ratings skyrocket.

Update: Someone just noted that besides being easy on the eyes, she gets extra bonus points for being French, which would annoy the hell out of the "freedom fry" brigade.
Posted by J at 11:33 PM

My God, man, I'd pay money just to hear her say "filibuster."

I feel ashamed to admit it, but I want her to lie to me.

OK, I'm really not ashamed about that.

She can help viewers get in touch with their inner Frenchman.

But I hear she's a Mike Moore groupie(/freeps heads explode)!!

Actually, didn't the "author" of that go all ballistic on the Chimperator last year?

And yes, I'd tune in every night if she were reading the news. I might even try to learn a few words of French ("Madamoiselle, vous les vous dances la Bastrang, la Bastrang?" -- from a Qeubecois fiddle tune -- is about it so far, and I KNOW I misspelled half the words in that short bit there).

Perspicacious, incisive analysis -- with cleavage! But I really want to know: does she do commentary?

Anne Sinclair (http://fr.wikipedia.org/wiki/Anne_Sinclair) used to host a devestatingly insightful news show called "7 sur 7", which had political figures on to discuss the news of the week. She knew her stuff, demanded answers, and never let someone skate. If she couldn't get a straight answer out of them, she told the audience she didn't think she had gotten a straight answer before moving on to the next question.

She also won a poll in France one year of "woman I would most like to sleep with", topping noted sex celebreties of the time. (Early 90s.)

Wow, just to hear her speak french and then to give her my french fry!